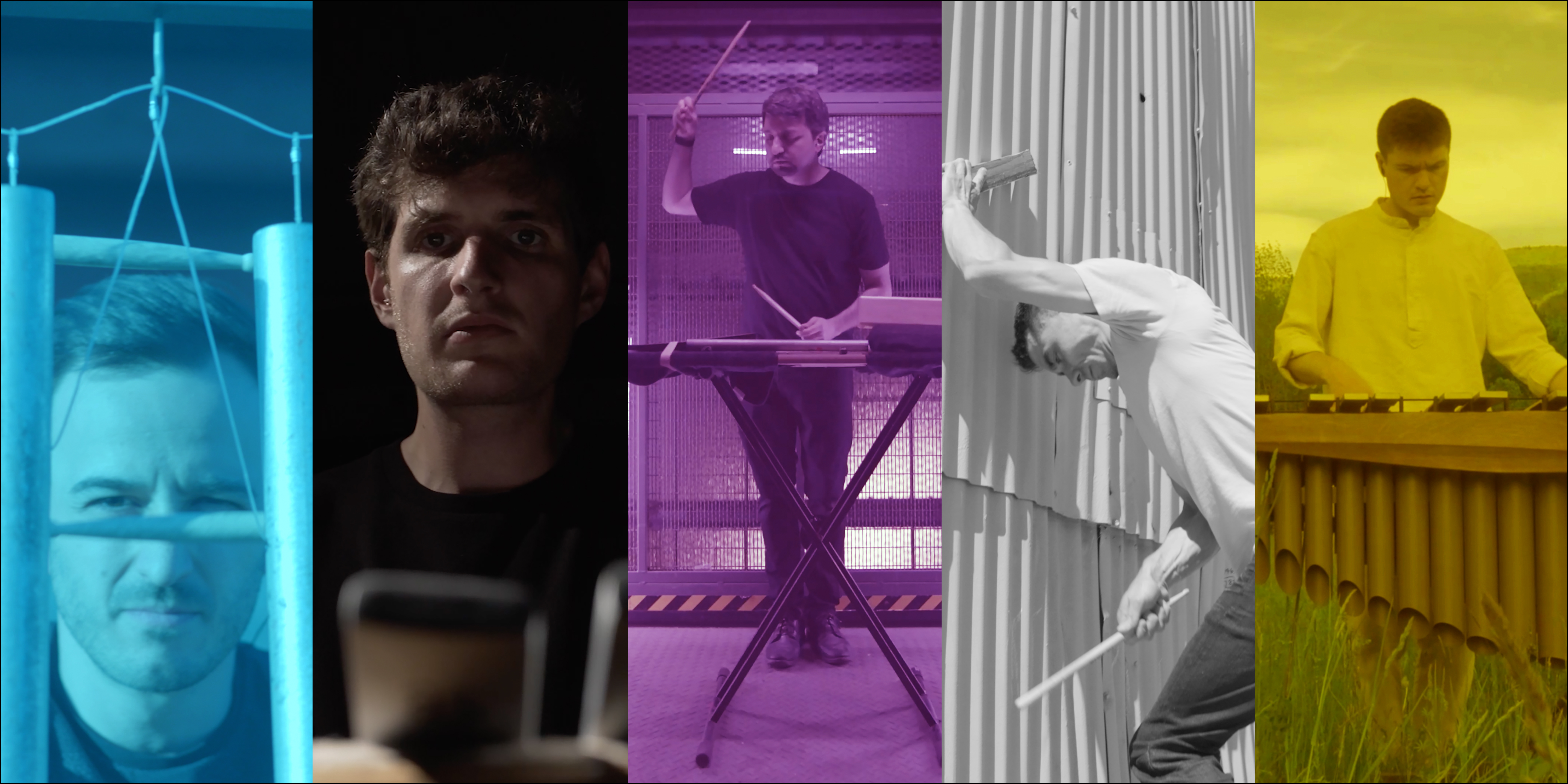 Seven Pillars will be released on September 24, 2021! Pre-order it today.

Seven Pillars is the culminating project of our first decade as an ensemble. It’s also a project whose lifetime we hope will last well beyond our own. Seven Pillars began with the mind of its composer, Andy Akiho, whom each of us came to know in a unique way—through overlapping years at school, early exposure to his compositions, binge-watching marching percussion shows he was a part of, or admiring his work as a steel pan virtuoso. The common thread between these encounters was a recognition of his exceptional creativity. Andy has a rare ability to write music unlike anything we’ve ever heard, and yet it has a transcendent familiarity, an inevitability. This combined with his understanding of the percussive craft makes him a truly exciting collaborator.

It was shocking to all of us in Sandbox that, as of seven years ago, Andy had not written a single note for percussion quartet. To us, this was akin to Chopin not writing any solo piano pieces, or Haydn not writing any string quartets. Thankfully, this was remedied by the Time Travelers quartet who commissioned a 10-minute piece from him in 2014. As Andy wrote this piece, he saw it fitting inside a larger work and he encoded this message into the name, Pillar IV. As he wrote Pillar IV, he sketched out ideas for the other movements, and even wrote a draft of Spiel, the glockenspiel solo. Sandbox was itching to play Pillar IV, and we put everything we had into learning it. While this was the approach we brought to every piece, it also served to show Andy that we were a quartet capable of taking on the larger work, a piece that would eventually be called Seven Pillars.

Our plan worked, and in 2017 we were ready to partner with Andy on this journey. None of us had ever produced a piece of this magnitude before, but we all sensed the necessity of this work. It had to exist. 80 minutes of Andy’s music comprising seven quartets and four solos would be a treasured addition not just to the percussive tradition, but to the entire music world.

To start this journey, we spent roughly five weeks at Avaloch Farm Music Institute in the summer of 2018 and fall of 2019—a massive thank you to Fred, Deb, Dian, Pete, and the entire Avaloch family for putting up with us. Avaloch is an idyllic environment where we had space to work, delicious food to eat, beds to sleep in, and, most importantly, time to spend together building trust and rapport.

We settled into a work schedule that was roughly noon until 4am. I think we woke up for breakfast about as many times as we stayed up until breakfast. Andy has a contagious energy and enthusiasm that, in our first visit, motivated us to generate the large-scale form for Seven Pillars, memorize and record Pillar IV, plus make arrangements and recordings of Empty Your Mind and Haiku 2, two of Andy’s other works.

This time together at Avaloch cultivated a sort of interpersonal vocabulary, a vocabulary that we used in our second Avaloch session for Andy to compose on us in real time as if we were a live MIDI sequencer. In this way, we developed and recorded sketches for the majority of the piece.

This was all in preparation for a live world premiere in April of 2020, but we all know how that chapter ends. Like the rest of the world, when the COVID19 pandemic hit, we pivoted. Rather than waiting around for live performances to come back, we set our sights on something we could control: making the album you have before you.

Making an album in a pandemic is quite a unique experience. After a slew of tests and quarantine periods, we expanded our pod of four percussionists to include our composer, Andy, and our audio engineer, Sean Dixon. Together we went off to another extended residency at Avaloch Farm, where we recorded, produced, and edited Pillars II, III, IV, V, VI, most of VII, and Spiel (the glockenspiel solo). We repeated that process again at PS21 Performance Space in Chatham, NY where we recorded Amethyst (the vibraphone solo) and began mixing the album. And finally, we gathered twice more at our rehearsal space in Brooklyn, NY to finish recording Pillar VII, Pillar I, carTogRAPh (the multi-percussion solo), and mARImbA (the marimba solo).

In some ways, this feels like the end of a seven-year journey to create and record this monolithic piece. But in a more real sense, this is just the beginning. Starting now, Seven Pillars begins its life in the world, a life that we feel honored to have helped create. Now and in the future, we hope it can reach as many ears as possible, impacting listeners as much as it has impacted us.

Seven Pillars will be released on September 24, 2021! Pre-order it today.